One of the so-called “Greeks”, delta measures how much an option’s price moves as a result of a $1.00 price change in the underlying stock. Note that only options have delta, not the stock. We have seen that the factors primarily influencing option price are the stock price, implied volatility and delta. Call option values rise with the underlying stock, and put values move inversely to the underlying stock’s price, so their deltas must be expressed differently. 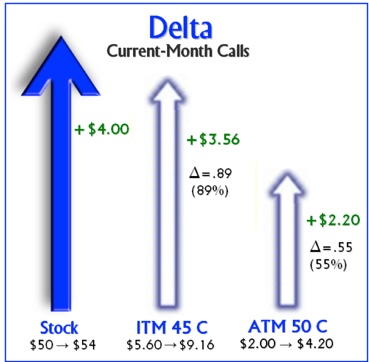 As you can see, the concept of delta just isn’t all that difficult. But since call and put values move inversely to each other, let’s compare put and call price changes, using the same stock example. 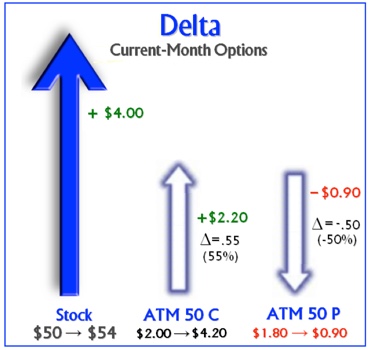 The delta illustration at left shows the same $4.00 stock move as above, but instead compares the price movement of the current-month $50 Call and $50 Put, both of which are at the money as the stock move begins.

Ah, but the $50 Put price fell as the stock rose, because put values move inversely to both the stock and the calls.

Actually, delta is an evolving thing. As the stock moved $4.00 in the above example, notice that the 50C, originally at the money, became $4 in the money as a result. Its delta will increase due to that in the money move. The 50P, also at the money originally, became $4 out of the money as a result. The further it moves out of the money, the lower its delta will become. Their 55% and 50% deltas, respectively, changed due to the stock’s move: the put’s delta dropped and the call’s delta increased.

In other words, by the time the stock had moved a couple of dollars, those options were no longer at the money, and their deltas began changing. Thus delta is really just a way of approximating how much we can expect an option’s value to move with the stock.

The example in Figure 5.3 following is similar, but much more extreme. In this example, the stock begins at $50 and plummets to $30. How would the at-the-money $50 Put’s price respond to such a movement? 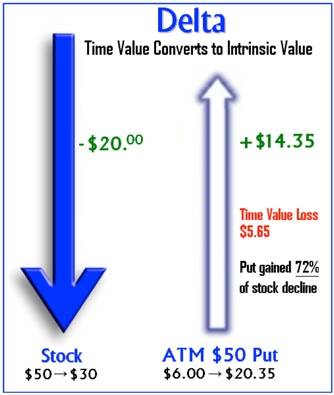 When the stock began its sell-off from $50, the at-the-money $50 Put (expiration is four months out in time) had a premium of $6.00, all of which was time value.

Being now $20 in the money, the $50 Put has almost no time value – only $0.35. This makes sense, because there is no way that a long-dated option $20 in the money would have much time value. That’s the way it works.

Long story short, time value was slashed from $6.00 to $0.35. Presto digito: time value is converted to intrinsic value. This conversion of time value is not an effect of delta, but our delta discussion is the ideal place to explore it.

Option Delta in the Current Month

Now that we see how delta works, what are normal deltas in the real world? We will start with the current month, the most important one. While there can be and are many exceptions, prices of current-month options typically exhibit roughly the following deltas:

Delta matters. Suppose that you sold the $45 Call when the stock is $40. Being $5 out of the money, the call likely would have a delta of approximately 30%. Then the stock begins dropping, which makes the $45 call strike further and further out of the money. Delta is also dropping, of course, as the call’s moneyness changes. By the time the stock hits $35, the delta could be lower than 20%. If you decide to buy the call to close, it will be surprisingly expensive to repurchase, because as delta falls, the call loses value at a progressively slower and slower rate.

It is maddening to watch a stock drop sharply and be short a call that is losing value slowly. This is a characteristic of out-of-the-money calls, however, that should be borne in mind. While it is true that selling OTM calls will position us to make a much bigger profit if the stock is called away, the low delta makes OTM calls expensive to buy back if the stock falls. This is not a bad thing, but be aware of the trade-off.

Delta is a fluid thing, because stock prices move and time passes. And both effect delta. Let’s examine how the delta of a $45 call will change as the stock price moves, and as time passes, in Figure 5.5 below. 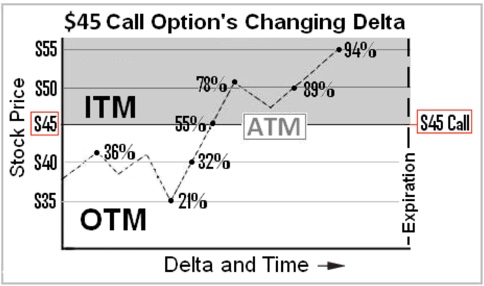 Delta also increases as expiration nears. Note how the call has a 78% delta the first time the stock hits $50, but the second time the delta is much higher, because expiration has drawn near.

For this reason, at any given time we can consider an ITM option to be winning (or at least ahead) and for the OTM option to be losing (or behind). This is why delta is low for OTM calls; they haven’t lost yet, but they are behind. When a stock price falls, the OTM call’s delta falls in truth not because of any mathematical law, but because the call is “losing” – getting deeper and deeper in the hole, so to speak.

Clearly, an option’s sensitivity (delta) to changes in the underlying stock’s price is dependent upon whether the option is:

But this dynamic is truest for current-month and perhaps the next-month options. When options get further out in time, the dynamics of delta begin to change, because greater time-to-expiration means a greater opportunity for losing options to win; and for winning options to lose. For now, let’s look at delta on real options and see how they stack up to the delta predictions made in Figure 5.4.

> Find Out How To Close A Covered Call Trade

What Is An Options Chain?