Is BlackSky Technology Stock A Buy? Global monitoring firm BlackSky Technology did something historic in December 2021. The company achieved the world’s highest ever satellite revisit rate, managing to clock a peak 15 hourly visits throughout the day.

This is a big deal. BlackSky is an Earth-imaging business providing real-time geospatial intelligence services, and the ability to generate large amounts of satellite data is vital in maintaining a competitive edge.
Indeed, Earth observation is a rapidly expanding sector right now. The total addressable market for the space is estimated to be worth up to $15.9 billion, with the industry expected to grow at a compound annual growth rate of 6.92% over the next ten years.
It’s no surprise, therefore, that so many companies are innovating in the field at present – and although the market remains fragmented, that won’t be the case forever.
So, with such a high prize at stake, let’s see what BlackSky Technology has to offer.

What Exactly Does BlackSky Technology Do?

BlackSky Technology operates a constellation of proprietary satellites that enable customers to obtain valuable insights into a range of commercially and strategically important activities.
The company uses over 100 thousand data sources every day, making around one million geo-referenced observations of economic and environmental phenomena from all around the world.
BlackSky collates this information to populate its SaaS platform, Spectra AI, and applies cutting-edge computing techniques to create actionable data for its roster of clients.
While the business first launched its Pathfinder satellite in 2016, it wasn’t until 2021 that BlackSky underwent a SPAC merger with Osprey Technology Acquisition to start trading as a publicly-listed company. 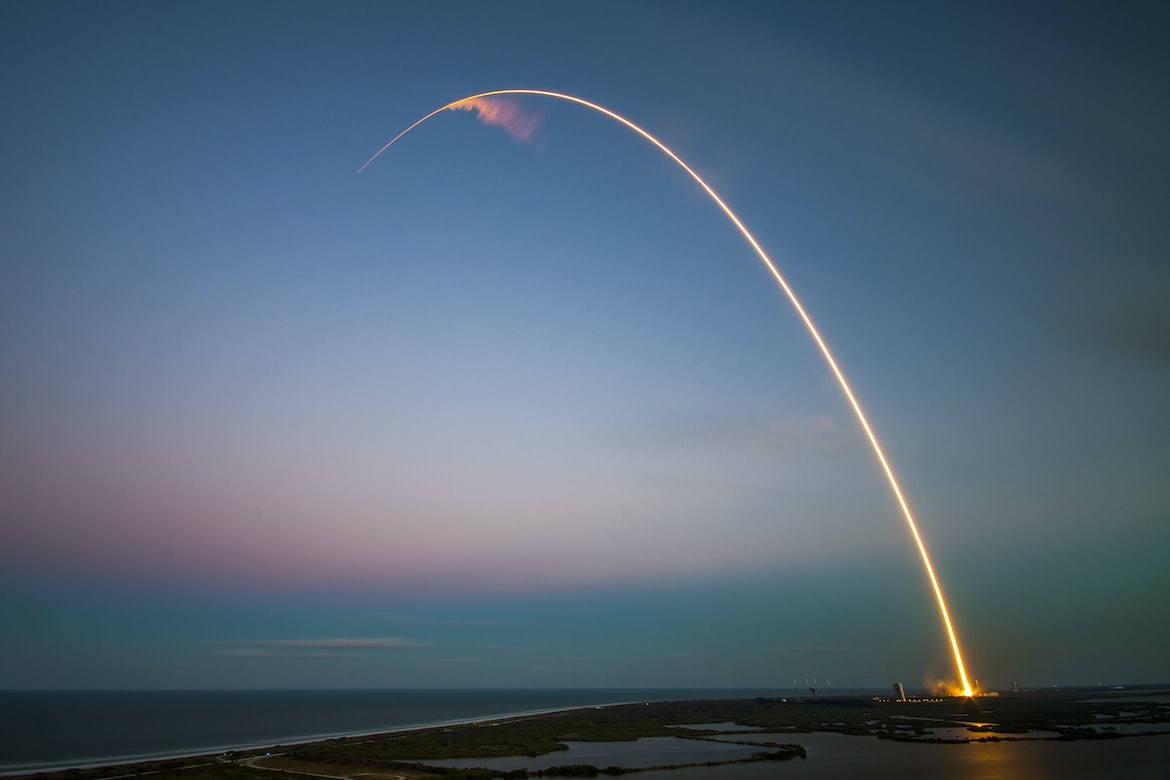 For the First Quarter 2022, BlackSky reported a record revenue of $13.9 million, up 91% from the same time the year before. Of this, around 70% of the firm’s total sales came from its imagery and software services wing, an increase from the 63% it derived from the segment in 2021.
Unfortunately, the company also registered a net loss of $0.17 per share of common stock for the three months ended March 2022. However, this was at least an improvement on the $0.70 it lost in the equivalent period prior.
Despite this, BlackSky’s leadership team felt confident enough to reiterate its full-year revenue guidance, stating it believes it’s still on track to bring in a top line of between $58 million and $62 million. That would imply a mid-point increase of 76% from the $34.1 million it made in 2021.
To get a handle on how BlackSky’s valuation stacks up against other space technology firms, it helps to compare the company to Maxar Technologies Inc., a similar, albeit more mature, satellite imagery enterprise.
For example, Maxar currently has a very respectable EBITDA margin of 24%, which is particularly impressive considering it’s growing its forward operating cash flow at a rate of 33%. Furthermore, the company also has a solid trailing twelve-month price-to-cash flow ratio of 6.0x, a figure that easily beats the sector median of 15x.
Besides its annual revenue growth mentioned earlier, BlackSky’s financial performance is pretty underwhelming. The company’s EBITDA margin of -246% seems extremely weak, even though we already know the business is not yet turning a profit.
Moreover, BKSY’s gross profit margin of 1.2% is equally uninspiring, especially compared to MAXR’s 46%. Indeed, its price-to-sales multiple of x2.2 is nearly double that of Maxar’s x1.2, which suggests the business is currently overvalued.

BlackSky vs Maxar vs Planet.com

Although BlackSky holds the record for the best temporal resolution metric – i.e., the time that passes between image and data collection periods for a particular geographical point – the company falls behind its rivals when it comes to other kinds of data characteristics.
For example, Maxar is considered to have the highest resolution among its Earth imaging peers, while Planet Labs boasts a satellite constellation “10 times that of any competitor.”
It also has to be noted that the firm suffered a terrible price loss recently. The stock is down 78% over the last year, and short interest in the business is at 5.5% at the time of writing.
That said, pretty much all early-stage, high-growth outfits lost value during the crash of 2022, and BlackSky Technology is no different.
Indeed, as a counterpoint to any negative investor sentiment surrounding the company, BKSY has actually delivered a couple of big wins lately, bagging at least two major contracts in the last few months.
The first was a deal with the National Reconnaissance Office, which will involve the company providing “a comprehensive set of imagery services” to the U.S. government. BlackSky believes this contract reaffirms its high-revisit constellation capabilities, and will be an essential catalyst for its Spectra AI platform in the future.
Secondly, BKSY also inked an agreement with the Joint Artificial Intelligence Center to utilize its “unique, data-rich platform” to create data sets for the United States Department of Defense. This contract could be worth up to $241 million over the following five years.

Is BlackSky Technology Stock a Buy or Sell?

BlackSky’s strong momentum on both the revenue and earnings front demonstrates the company is heading in the right direction.
However, the broader economy – defined as it is by high interest rates and rising inflation – is just not conducive to the success of a business like BKSY at the moment.
Still, BlackSky trades in the low single digits today, and may have fallen as far as it’s ever likely to go. Either way, investors should avoid the stock for now, assessing it again only when the markets begin to recover.

Where is BKSY Headed Next?

Is BlackSky Technology A Buy Over The Next 30 Days?