Many hotel chains have taken substantial hits over the last two years, and not all are solid investments at the moment. Luckily, there are still some good finds in this niche that can help investors take advantage of the resurgence of travel over the coming years. Here are four of the top hotel stocks to invest in at the moment.

Despite ongoing pandemic difficulties, Sunstone Hotel Investors (NYSE:SHO) is showing early signs of recovery in its business.
According to its Q4 earnings call, the company brought in $174 million for the quarter. This was a gain of 3.9 percent compared to Q3 and the best quarterly revenue the company has produced since the beginning of the COVID-19 pandemic.
Occupancy also improved to 55.6 percent, driven largely by improved bookings in the company’s resort properties.
Cost controls have been a major part of the company’s efforts to regain lost ground. Last year, Sunstone was able to reduce annual expenses by $14 million, despite a 5 percent average wage increase. 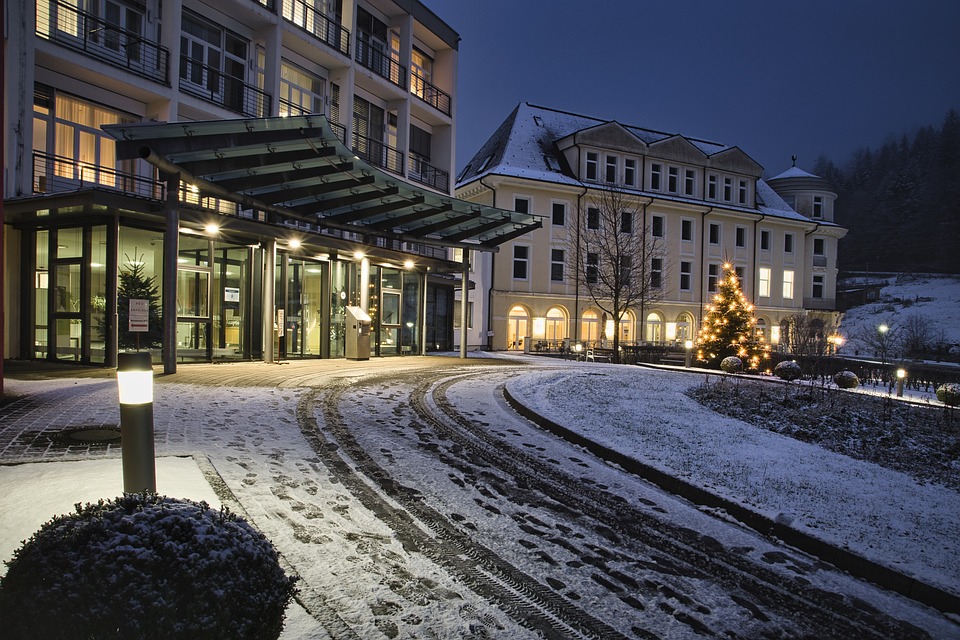 Perhaps Sunstone’s strongest point, though, is its balance sheet. Even after the pandemic, the company holds a comfortable $230 million in cash and cash equivalents.
While it does carry $611 million in total debt, it’s worth noting that only two of the company’s hotels are currently encumbered. Sunstone can also draw on a revolving credit capacity of up to $500 million. Critically, the interest rates on the company’s existing debts average just 3.69 percent.
SHO analyst price targets are somewhat less favorable for Sunstone, showing a gain of just 0.8 percent from $11.93 to $12 over the next 12 months. However, the company could be a good long-term buy based on its growth and strong cash reserves. Over time, these factors will likely allow the stock to rebound and produce solid investor returns.

Hotel giant Marriott (NASDAQ:MAR) is among the hotel companies that appear to be having the strongest rebound. In Q4, the company reported diluted EPS of $1.42, compared to a loss of $0.50 in Q4 2020. Worldwide revenue per available room rose drastically, improving by 124.5 percent year-over-year.
During this time, Marriott also continued to expand its holdings. In 2021, the company added 86,000 rooms globally. Approximately half of these were in international markets, helping Marriott to expand its presence outside of North America.
Going forward, these new properties will allow the company to tap into renewed international travel spending as restrictions continue to ease.
Marriott has also been almost uniquely successful in building loyalty among its customer base and encouraging direct bookings. By relying less on third-party booking agencies, the company is able to improve its profits from bookings. Between its loyalty programs and a portfolio of over 8,000 properties, Marriott is in a very good position to capitalize on the return of travel.
As with Sunstone, Marriott’s next year will likely be quite lackluster in terms of share price growth. Analyst forecasts suggest that the stock will lose 4.3 percent, retreating from $181.87 to $173.
Given analyst expectations of up to 40 percent year-over-year revenue growth in 2022, though, it’s quite possible that Marriott would exceed this target. If not, the company will still be on strong footing for future growth.

Hilton Worldwide Holdings (NYSE:HLT) produced growth nearly as strong as Marriott in 2021, with revenue per available room increasing by 104.2 percent year-over-year in Q4. The company also opened 94 new hotels for a net increase of 13,100 rooms in its system. Further net unit growth of 5 percent is expected in 2022.
Hilton expects substantial travel industry improvements in 2022 to accelerate its recovery. Specifically, the second half of this year could be a major turning point for the company.
As of now, average daily rates for the company’s rooms are still below 2019 levels, albeit higher than they were in 2020. As demand continues to rise, this rate should trend upward and substantially improve the company’s revenues.
Much like Marriott, Hilton is forecast to take slight losses in the coming 12 months. Analyst price targets give the stock a median price of $155, down by 2.1 percent from its current price of $159.12. Going into 2023 and beyond, however, improving conditions in the travel industry should help to buoy the stock’s price.

InterContinental Hotels Group (NYSE:IHG) was among the best performers among hotel companies in 2021 in terms of pure growth.
Full-year revenue rose from $992 million in 2020 to $1.39 billion in 2021, a gain of 40 percent. Critically, full-year revenue also topped that of 2019.
This demonstrates that InterContinental is on a fast growth trajectory and may not be weighed down too much by restrictions in the long run.
Operating profits also saw extremely strong growth, rising by 144 percent from $219 million in 2020 to $534 million in 2021. This represents some of the strongest growth in profitability among hotel chains, particularly in light of the difficulties of the past two years.
Unlike most other hotel stocks, InterContinental could actually provide decent returns over the next year. Analyst forecasts give the stock a median target price of $75.26, up 9.5 percent against the current price of $68.71.
While not a spectacular return, this positions InterContinental as the best contender over the near term. Presumably, ongoing growth will allow the company’s stock to continue rising well into the future.

Which Hotel Stock Should You Buy?

Overall, InterContinental is the chain with the best potential over the next 12 months. However, Marriott and Sunstone are likely the best long-term investments.
Marriott’s massive portfolio of properties and ongoing international growth put it in a strong position to grow going forward.
Sunstone, meanwhile, has enough of a cash cushion to ride out potential future waves of lockdowns and continue investing.
As with most industries, it makes sense to diversify your hotel holdings. This is especially true at the moment, as some hotel chains may struggle more than others for future virus outbreaks. By creating a balanced portfolio, you can mitigate your risks and potentially profit from renewed enthusiasm for travel among consumers.