What Stocks To Buy If Nuclear War Breaks Out? The specter of nuclear war is once more a reality for humankind, only this time, the potential catalyst happens to be the ongoing conflict in Ukraine.

For months now, tensions have been mounting in the region, with President Vladimir Putin openly talking about the possibility of launching atomic strikes against his enemies. Recently, however, that rhetoric was given more credibility, with U.S. officials admitting that senior Russian military leaders had privately floated the idea of using such weapons.
All of this has led to a tangible sense of instability within the region and the world at large. And with both sides now armed with nuclear weapons, the stakes are incredibly high. The danger here is that if one side miscalculates or overreacts, it could quickly escalate into a full-blown conflagration.
So far, cooler heads have prevailed. But with the situation still in the balance, the risk of the war turning nuclear remains a concrete proposition.
However, suppose that the worst-case scenario does play out. In that situation, governments would have to act pragmatically, making medical provisions for a population suffering the likely consequences of a nuclear attack.

Stocks That Benefit From Nuclear War

In fact, it appears the Biden administration is already doing just that. News organizations have recently reported that the U.S. Department of Health and Human Services has invested $290 million to purchase supplies of a drug named Nplate.
The medicine, typically prescribed to adults and children with immune thrombocytopenia, is also approved to treat blood cell injuries that can accompany acute radiation syndrome.
Amgen – the company that manufactures Nplate – might not be a household name like Moderna or GlaxoSmithKline, but it’s still a well-established business with over 40 years of experience behind it.
Given that the company will now play a prominent role as part of America’s Administration for Strategic Preparedness and Response, we’ll examine whether the firm offers as many benefits to investors as it surely will to the nation over time. 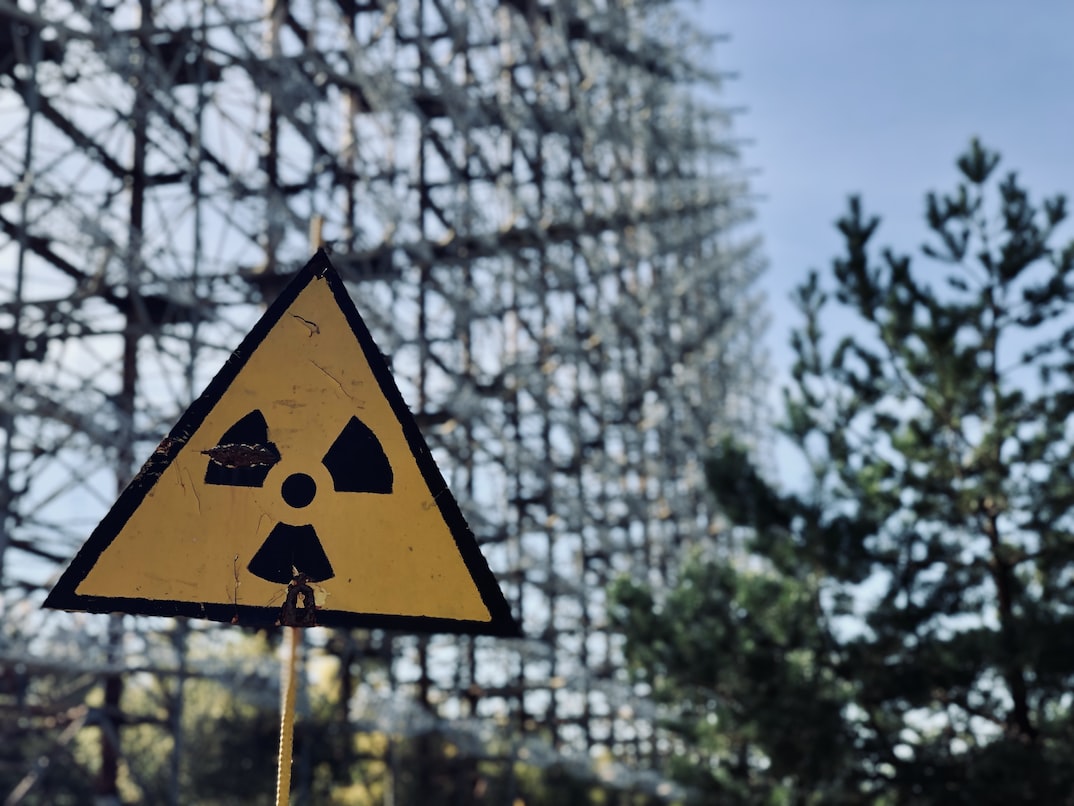 Source: Unsplash
Amgen is currently one of the world’s leading biotech companies. The firm was founded in 1980, and its mission is to serve patients with serious illnesses by providing innovative therapeutics that address unmet medical needs.
Today, Amgen remains true to its mission by delivering life-changing therapies to patients with serious illnesses such as cancer, cardiovascular disease, and bone and joint diseases. The company’s focus on innovative therapeutics is enabled by cutting-edge science and technology, including human genetics and protein engineering.

Amgen enjoys the rewards of having a robust pipeline of “first-in-class opportunities,” as well as a suite of products that have hit the market and are already generating real-world revenues.
One of those lucrative treatments is Embrel, Amgen’s most profitable medication of the last few years. It was the first biologic approved for the treatment of Ankylosing Spondylitis (AS), and has been shown to be effective in reducing symptoms and improving physical function in patients with AS.
Embrel is also an anti-TNF receptor that binds to and inhibits the activity of TNF and can be used to treat other inflammatory diseases such as Crohn’s disease, psoriasis, and rheumatoid arthritis. The drug has been used by over 180,000 patients worldwide and has generated billions of dollars in sales for Amgen.
With a blockbuster drug like Embrel in its stable, it’s no surprise that AMGN produced cash flows of $1.7 billion in the second quarter of 2022. However, while its sales only increased 1% year-on-year to $6.6 billion, it did see volume growth of 10% over the period.
Despite relatively flat revenue numbers, Amgen still reaps huge profits from its operation. Its earnings per share increased from $0.81 to $2.45, and its GAAP operating income increased 175% from $0.8 billion to $2.2 billion.
That said, on some measures, AMGN might be considered overvalued. For example, for a company in the Health Care industry, its non-GAAP PEG ratio of 3.76x is high compared to the sector median of 1.79x. However, its P/E multiple is aligned with its peers, while its enterprise value-to-EBITDA is decidedly low at just 10.8x.

It would be remiss not to mention the merits of Amgen’s dividend payment, not least because it scores so highly on many of the metrics that income investors favor.
For instance, AMGN has increased its dividend payout for the last ten years, with an impressive 5-year compound annual growth rate of 11.2%. At the same time, its forward yield might be on the low side at 2.85%, but for a distribution with such stellar growth, that isn’t too much of a problem.
Furthermore, the company’s likelihood of continuing to pay its dividend also appears high. To begin with, the firm hasn’t missed a payment since it started its shareholder distribution, and it’s increased that dividend every year to boot.
Secondly, Amgen boasts a cash flow payout ratio of 42.3%, which suggests the business isn’t overreaching itself in covering its dividend payment.
Finally, the company has a return on common equity of 123%, meaning that AMGN is competently run, and its management is adept at producing bottom-line earnings.
Indeed, return on common equity measures how much profit a company generates for every dollar invested by its shareholders. In other words, it tells you how well a company uses the money entrusted to it, which is, in turn, a key indicator of its operational efficiency.

Is AMGN Stock A Buy?

To date, Amgen is easily beating the broader market with gains of nearly 19% this year. As mentioned, its forward P/E fraction of 15.5x is actually better than the industry average, suggesting its share price could trend even higher in the relatively near future.
Interestingly, many of AMGN’s most important drug brands witnessed double-digit sales growth in the quarter, with EVENITY increasing 46% year-on-year to deliver a record $191 million. At the same time, Repatha, a global segment leader in the treatment of high cholesterol, also grew revenues by 14%.
The firm’s strong growth in product sales and high-level profitability offset its slow overall revenue increases this year. And with the new U.S. government contract for Nplate under its belt, Amgen’s prospects just got a whole lot more assured.